Root and Toot > Blog > Supermarket Changes; The Rise Of Aldi

Supermarket Changes; The Rise Of Aldi

Supermarket Changes; The Rise Of Aldi

Someone pointed out to me last week that if at the turn of the Millennium you’d been told that within fifteen years The Royal Bank of Scotland and The Bank of Scotland would both have collapsed, Rangers Football Club would have gone bust and played in Division 3 and Scottish Labour would be trounced in a General Election you’re unlikely to have believed them.

To be fair the last of those four hasn’t happened, yet, but you don’t need to be Nostradamus to see the political landscape in Scotland has changed out of all recognition. Four organisations that were once regarded as the ‘establishment’, untouchable and here forever, have found that that nothing is forever.

This conversation resonated as I’d only recently read figures that reported how Aldi’s market share is now greater than Waitrose and that they’re now the sixth largest supermarket chain in the UK. Ironically the same figures explained that Waitrose market share has also grown, just not as much as Aldi’s. The only other supermarket chain to experience growth in that period was Lidl, so often grouped together with Aldi by both the consumer and industry.

There was a time, and it doesn’t feel that long ago, when both Lidl and Aldi were viewed with a strange mix of pity and contempt by the supermarket industry. Many observers felt their quaint European ways wouldn’t work in the cutthroat UK grocery industry. It seems they were wrong and increasingly the grocery trade is taking much more notice of Aldi and Lidl, as are suppliers and consumers clearly.

I had a conversation with a manager at Kerry Foods a few years ago. They have a division that works closely with most of the UK supermarkets and he explained how surprised he’d been by the high standards demanded by Aldi and Lidl. These weren’t just production, health, safety and capacity standards, all the supermarkets are very demanding on that front, this was in terms of the quality of ingredients used and finished product produced. Their high standards didn’t match the popular ‘cheap’ reputation the stores had. Their dedication to the quality of the product was notable. At last year’s Royal Highland Show Aldi had a large marquee, not in itself unusual for a supermarket. Inside they had a variety of ‘local’ suppliers and their products and were carrying out blind taste tests against competitor brands. The products and the results of the test were impressive, the marquee was very busy and the overwhelming response from visitors was positive.

The large supermarkets are finding life harder just now, that’s all relative of course as a quick look at their profits will confirm, however it’s clear that things are changing on the grocery front. What will the ‘high-street’ look like in 15 years time, what will become of our current establishment untouchables? I’m old enough to remember when Fine Fare were top dogs in these parts and Safeway were the establishment.

The lesson to take from all of this seems to be that focussing on producing the best product you can pays dividends in the long run. That’s not a new lesson, just one not everyone remembers all the time. 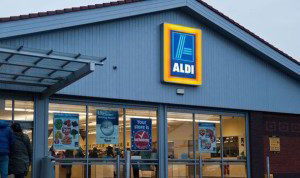